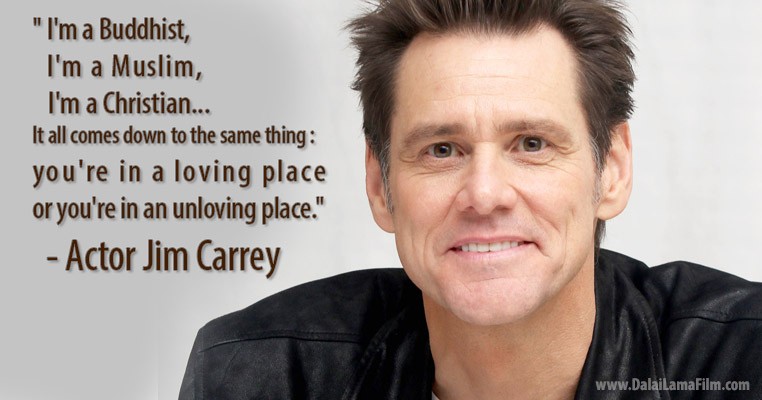 Actor Jim Carrey’s Spiritual Awakening, His Advice for Us, and Meeting the Dalai Lama

The Hollywood Actor and Survivor of Depression Speaks on His Views of Buddhism and Spirituality. 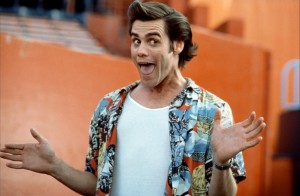 Jim Carrey, the Canadian-born Hollywood actor best known for his roles in such comedies as Ace Ventura, Dumb & Dumber and Bruce Almighty– as well as his dramatic turns in films such as The Truman Show and Eternal Sunshine of the Spotless Mind, is no stranger to spirituality.

In an Interview with CBS he tells of his bouts with depression and his goal to live a life free of all drugs (even limiting his coffee intake). He speaks of “hang(ing) out with Buddha and Krishna and all of those guys” and even shares with us where he meditates and expands on his broad view of Spirituality: “I’m a Buddhist, I’m a Muslim, I’m a Christian. It all comes down to the same thing — you’re in a loving place or you’re in an unloving place.”

Jim Carrey also shared that “I wish people could realize all their dreams and wealth and fame so that they could see that it’s not where you’re going to find your completion… The effect you have on others is the most valuable currency there is.” 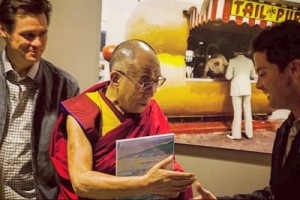 Jim Carrey and The Dalai Lama

The Dalai Lama, whom Carrey met at The California Science Center in LA in early 2014– where Carrey jokingly attempted to “rough-house” with His Holiness– supports Carrey’s point of view in Dalai Lama Awakening when he explains, “That one million dollars will not bring inner peace, happiness.”

“So many of us choose our path out of fear disguised as practicality,” says Carrey. “What we really want seems impossibly out of reach and ridiculous to expect, so we never dare to ask the universe for it. I’m saying, I’m the proof that you can ask the universe for it — please! And if it doesn’t happen for you right away, it’s only because the universe is so busy fulfilling my order.”

Carrey asks us: “How will you serve the world? What do they need that your talent can provide? That’s all you have to figure out. …I can tell you from experience, the effect you have on others is the most valuable currency there is.”

“Everything you gain in life will rot and fall apart, and all that will be left of you is what was in your heart. My choosing to free people from concern got me to the top of a mountain. Look where I am — look what I get to do! Everywhere I go – and I’m going to get emotional because when I tap into this, it really is extraordinary to me — I did something that makes people present their best selves to me wherever I go. I am at the top of the mountain and the only one I hadn’t freed was myself and that’s when my search for identity deepened.”

Carrey is also a friend and supporter of Eckhart Tolle and in 2009 gave a speech telling of his being “thrown into this expansive, amazing feeling of freedom” after knowing Eckhart and reading his books.

Echoing the Dalai Lama’s sentiment in Dalai Lama Awakening that it is the “long-term issues” that must be dealt with, Carrey remarks “What’s important to me is the long haul. It’s a strange thing, but sometimes I think that God is somehow fashioning my life so that I do stay interested and stay hungry.”