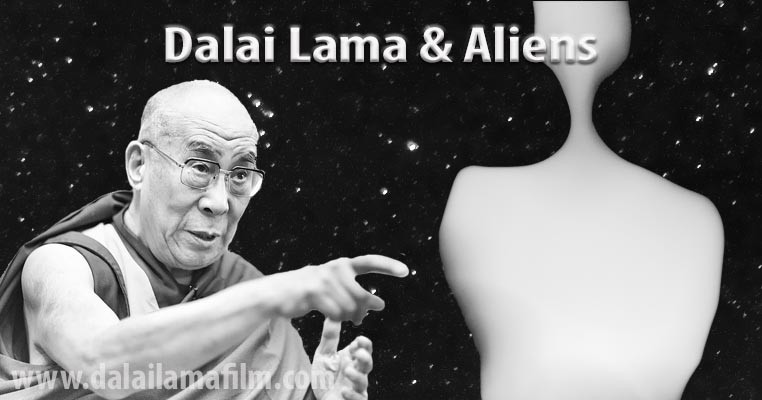 The Dalai Lama, Aliens and The X-Files

The X-Files maxim “The Truth Is Out There” could also be utilized by Buddhists in their constant search for spiritual truth, perhaps the more accurate motto the Dalai Lama would subscribe to is “The Truth Is IN There.”

Fox Mulder: “When convention and science offer us no answers, might we not finally turn to the fantastic as a plausibility?”

His Holiness the 14th Dalai Lama: “Eventually, if we receive some visitor from another galaxy…we can shake hand(s).” 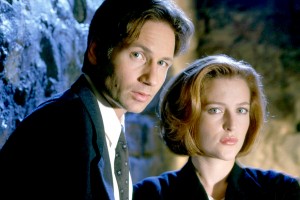 David Duchovny and Gillian Anderson in The X-Files

With The X-Files returning this year to TV for a limited 6 episode engagement, conspiracy theorists and UFO/alien enthusiasts around the world are no doubt rejoicing. The X-Files was the seminal show on the weird and wacky world of pseudoscience and all things extra-terrestrial. The show deals with two FBI agents chasing government conspiracies and little green men, with Fox Mulder (played by David Duchovny) being the more “open-minded” of the pair. Balanced out by his logical and science-driven partner, Dana Scully (Gillian Anderson in her iconic role), Mulder “wants to believe” but is always left right on the doorstep of absolute certainty. And while the show’s maxim “The Truth Is Out There” could also be utilized by Buddhists in their constant search for spiritual truth, perhaps the more accurate motto the Dalai Lama would subscribe to is “The Truth Is IN There.”

So what exactly does the Dalai Lama think about the existence of aliens and the possibility of other intelligent civilizations being out there in the universe? While there is not exactly a wealth of information regarding his opinion we do have a few indications both from his own words and from the work of several respected people in the field of para-psychology and the like who have spent time with His Holiness and spoken to him about it. 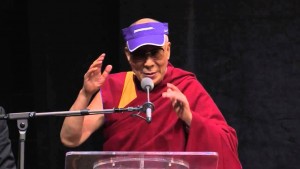 First and foremost we have a brief statement made by His Holiness when he spoke on Universal Responsibility and the Inner Environment at the University of Portland on May 9, 2013. Although “Universal” was probably not meant in such a literal way, the Dalai Lama briefly touched on what mankind should do if visited by beings from another world: “Eventually if we receive some visitor from another galaxy…Look, same [as] human beings- maybe a little different sort of shape- [but] furthermore same sentient being. Respect them… We can immediately shake hand- if they have some sort of similar hand there- we can shake hand. If we put too much emphasis on ‘we are human beings on this planet’ … that creates more anxiety, more fear.”

These words make it clear that not only is the Dalai Lama open to the basic concept that there may be other sentient beings elsewhere in the Universe but he extends his rule of compassion to them as well, pointing out that any sentient being deserves the same kindness and consideration- no matter what galaxy they may be from! 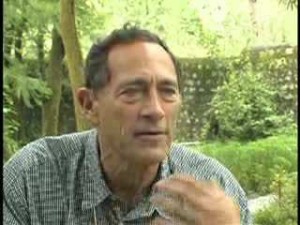 In an interview that Dalai Lama Awakening director Khashyar Darvich conducted with John E. Mack- a former Harvard Professor, Pulitzer Prize winner and abduction theory specialist- Mack spoke on his conversations with the Dalai Lama regarding aliens and how the Buddhist view allows room not only for inter-planetary beings but inter-dimensionary beings as well. He explains how His Holiness “classified intelligent life in the cosmos in three categories: beings like us that have form and are embodied, second were beings that have form but are not embodied, and the third is beings that have no form. So their cosmology has room for something like this where…for the west, for something to take material form from the other dimension- can’t be.”

Then there are there the many cases of respected astronauts who have had close encounters and have recently spoken publicly about such events- having been told to keep quiet for years for fear of creating a panic on Earth. Jean Houston, a prominent social scientist and philosopher in Compassion In Action (the follow-up and companion film to Dalai Lama Awakening) speaks on the time she spent with some of these former astronauts and the emotional and psychological issues they dealt with in returning to Earth after their time amongst the stars. Could some of these forgotten experiences have been due to the sighting of UFOs in orbit and the intensity of witnessing those sorts of truths? Certainly Fox Mulder would agree! But it isn’t all just conspiracy theories…

While there are no doubt many false quotes regarding aliens and UFOs attributed to the likes of Neil Armstrong and other famous astronauts and NASA scientists, there are a number of first hand interviews with luminaries such as Buzz Aldrin and Gordon Cooper– men whose observations are seemingly beyond reproach- in which they describe their encounters with UFOs during early space flights. Gordon Cooper even went so far as propositioning the United Nations to establish a committee into the investigation of UFOs from an, “unbiased and neutral point of view.” He states: “I believe that these extra-terrestrial vehicles and their crews are visiting this planet from other planets, which obviously are a little more technically advanced than we are here on earth.” You can even find some evidence (albeit not proof) of Neil Armstrong- the most famous explorer since Christopher Columbus- confirming with a medical officer that not only are their aliens out there but they have set up shop on the moon complete with radar, structures and all!

While The X-Files certainly buys into the more nefarious angle when it comes to aliens and their intentions, John Mack believes that they are here more to help us than to hurt us. They contact us to help us see the error of our ways in regards to global warming, widespread wars, disease and famine. And truly if that is the case we will want to shake their hands and offer them friendship just as His Holiness The Dalai Lama has suggested!

Ryan Charles (www.ryan-charles.com) is an editor and filmmaker who has worked in both narrative and documentary features. He has worked with filmmaker Khashyar Darvich for the past 3 years and was lead editor on Wakan Films’ Compassion In Action. In 2014 Ryan accompanied Khashyar to Sri Lanka to work on Wakan’s upcoming documentary The Silence of Happiness and in 2015 Ryan worked as the coordinator for the U.S. theatrical tour of Dalai Lama Awakening/Compassion In Action. Ryan lives in NYC and is also an avid musician.