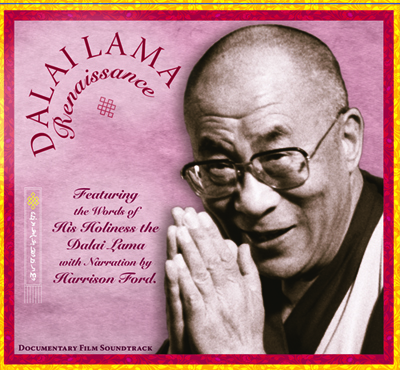 The Soundtrack CD to the Dalai Lama Renaissance is now available for purchase, here: www.DalaiLamaCD.com

An original musical mosaic embodying the experiences and universal truths the Dalai Lama personifies. Tibetan, Indian, Sufi, Jazz and Afro-Cuban music overlaid with pearls of wisdom in the Dalai Lama’s own words and with the voice of Harrison Ford.

A Review from L.A. Yoga magazine:

This important album was assembled and produced by Michel Tyabji and Rosa Costanza Tyabji as part of a documentary titled Dalai Lama Renaissance. The soundtrack album consists of twenty-six tracks of Tibetan-influenced chants and pieces of music that work as a perfect audio accompaniment to the visual images of the Dalai Lama. Each offering on this album is part of a collective providing a narrative that is overwhelmingly beautiful, compassionate and enlightened. There are numerous amazing artists on this collection and if you are a devotee, or just a supporter of the Dalai Lama’s journey, this album is a must-have.

Producer, music director and performer on many pieces, Tyabji has appeared playing drums and percussion throughout the world and is known for his work with legendary African artists including Ndala Kasheba and Garikayi Trikoti. Tyabiji is only one of many exceptional artists here, in the company of Larry Mitchell, Ralph “Kito” Rodriguez and composer, keyboardist and arranger Henry Medicine Bear Reid, all of whom produce music worth a listen. Tibetan singer/songwriter Techung plays traditional Tibetan instruments and prayers for the Dalai Lama on instrumental tracks and Roop Verma offers an inspired “Alap,” along with other gorgeous tracks. In “Bassant Blue,” and “Jog Jazz,” the New Delhi-based ensemble called Yoginis’ deep thoughtful drones were produced by Seattle-based composer Yogi McCaw. Also noteworthy, Lama Tsering Wangdu Rinpoche had me in tears with his delivery of “Lady of Great Bliss.”

Along with many of the musical tracks offered on this special CD, the listener can also enjoy hearing the words of His Holiness which helps to bring his message of “hope” home. I highly recommend this album for anyone interested in world music and a follower of the Dalai Lama’s journey throughout the world and hopefully back into his homeland someday soon. www.DalaiLamaCD.com .

A documentary film soundtrack, produced by Michel Tyabji and Rosa Costanza Tyabji. This is much more than a soundtrack of the film reviewed above. It is an eclectic remix of quotations by the Dalai Lama and narrations by Harrison Ford interspersed with a dynamic fusion of Tibetan, Indian, Sufi, Jazz and Afro- Cuban music. Featured musicians include Michel Tyabji, Tibetan recording artist Techung, Henry Medicine Bear Reid, Roop Verma, Persian vocalist Heyraneh, Lama Tsering Wangdu Rinpoche, Ralph “Kito” Rodriguez and several others. As with the film, this soundtrack is a unique journey that embodies the universal wisdom His Holiness personifies.

– Light of Consciousness Magazine (Feb 2, 2010)
The Soundtrack CD to the Dalai Lama Renaissance is now available for purchase, here: www.DalaiLamaCD.com