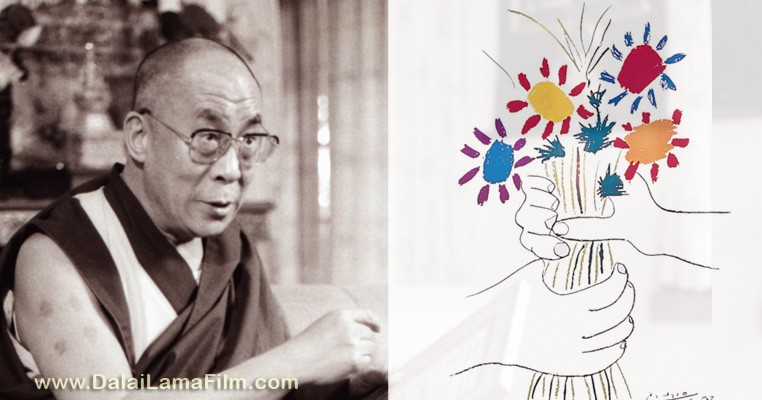 Can sex be used as spiritual practice?

What are the qualities of happy relationships?

In honor of Valentine’s Day, here are some Dalai Lama teachings regarding love, relationship and spiritual sexuality.

It is appropriate that this year, Valentine’s Day occurs about the same time as Tibetan New Year (February 9).

But what does he teach about love in the context of a relationship?

And even more unexpectedly, what has the Dalai Lama said about sex and sexuality?

On a fundamental level, the Dalai Lama often teaches that:

“The essence of any religion is good heart. Sometimes I call love and compassion a universal religion. This is my religion.”

As you would expect for the “Buddha of Compassion,” the Dalai Lama raises the standard of love beyond mainstream storybook culture, and distinguishes between “love” and “need”:

When we love someone, how do we know if we are giving too much and not receiving enough in return?

The Dalai Lama says that “selfless love is often misunderstood. It is not a question of neglecting oneself for others’ benefit. In fact, when you benefit others, you benefit yourself because of the principle of interdependence. I want to stress the importance of enlarging your mind and bringing the sufferings of others onto yourself.”

The greatest and highest love, and the Dalai Lama taught, benefits the recipient as well as the person who gives love, since we are all connected and interdependent.

When two people first meet and begin a romantic relationship, it may begin by fulfilling an emotional or physical need. But the deepening of the emotional and spiritual relationship leads to a more beneficial form of love:

“Compassion can be a mixture of desire and attachment; the love of parents for their child, for instance, is often associated with their own emotional needs and so is not wholly compassionate. Similarly, in marriage the love between husband and wife—especially in the beginning, when one isn’t fully aware of the other’s character—is more like attachment than real love. Our desire can be so strong that the person we are attached to seems good, even if that person is actually very negative. What’s more, we have a tendency to exaggerate the slightest qualities. So when one person’s attitude changes, the other person is often disappointed, and his own attitude changes as a result. That is a sign that love was motivated more from personal need than from an authentic concern for the loved one. Real compassion is not just an emotional response; it is a firm, thought-out commitment. Therefore, an authentic attitude of compassion does not change, even faced with another person’s negative behavior.”

For Buddhists, sexual intercourse can be used in the spiritual path because it causes a strong focusing of consciousness if the practitioner has firm compassion and wisdom. Its purpose is to manifest and prolong the deeper levels of mind. …Through special techniques of concentration during sex, competent practitioners can prolong very deep, subtle, and powerful states and put them to use to realize emptiness. However, if you engage in sexual intercourse within an ordinary mental context, there is no benefit.

But perhaps the most interesting and unexpected teachings from His Holiness concerns sex, which he has spoken surprisingly candidly about.

The Dalai Lama teaches that sex can help a person on their spiritual path, and can be a vehicle for spiritual growth and self-discovery:

“For Buddhists, sexual intercourse can be used in the spiritual path because it causes a strong focusing of consciousness if the practitioner has firm compassion and wisdom. Its purpose is to manifest and prolong the deeper levels of mind (described earlier with respect to the process of dying), in order to put their power to use in strengthening the realization of emptiness. Otherwise, mere intercourse has nothing to do with spiritual cultivation. When a person has achieved a high level of practice in motivation and wisdom, then even the joining of the two sex organs, or
so-called intercourse, does not detract from the maintenance of that person’s pure behavior. Yogis who have achieved a high level of the path and are fully qualified can engage in sexual activity, and a monastic with this ability can maintain all the precepts.”

“How does sexual intercourse help in the path?” the Dalai Lama says. “There are many different levels of consciousness. The potential of grosser levels is very limited, but the deeper, more subtle levels are much more powerful. We need to access these subtler levels of mind. But in order to do so, we need to weaken and temporarily stop grosser consciousness. To accomplish this it is necessary to bring about dramatic changes in the flow of inner energies. Even though brief versions of the deeper levels of mind occur during sneezing and yawning, they obviously cannot be prolonged. Also, previous experience with manifesting the deeper levels is required to make use of their occurrence in deep sleep. This is where sex comes in. Through special techniques of concentration during sex, competent practitioners can prolong very deep, subtle, and powerful states and put them to use to realize emptiness. However, if you engage in sexual intercourse within an ordinary mental context, there is no benefit.”

How does a Buddha or enlightened being experience sex?

The Dalai Lama distinguishes between a controlled and uncontrollable desire:

“Sexual desire is blind, and that poses a problem. When you say to yourself, I want to have sex with that person, you are expressing a desire that the intelligence does not direct. On the other hand, when you think, I want to eradicate poverty from the world, that is an intellectually controllable desire. What’s more, sexual gratification represents only an ephemeral satisfaction. As the great Indian sage Nagarjuna said: ‘When you have an itch, you scratch yourself. But not having an itch at all is better than scratching yourself for a long time’.”

But at the center of his teachings, the Dalai Lama emphasizes the transformative qualities of love and compassion:

“IN TIBET WE SAY that many illnesses can be cured exclusively by the remedy of love and compassion. These qualities are the ultimate source of happiness, and we need them in our innermost being.”