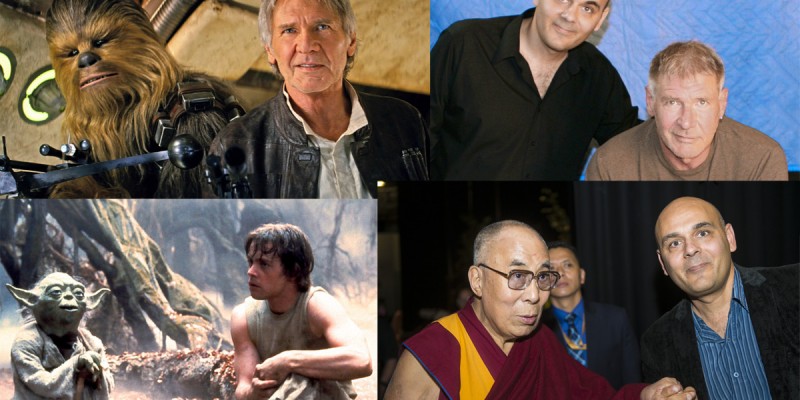 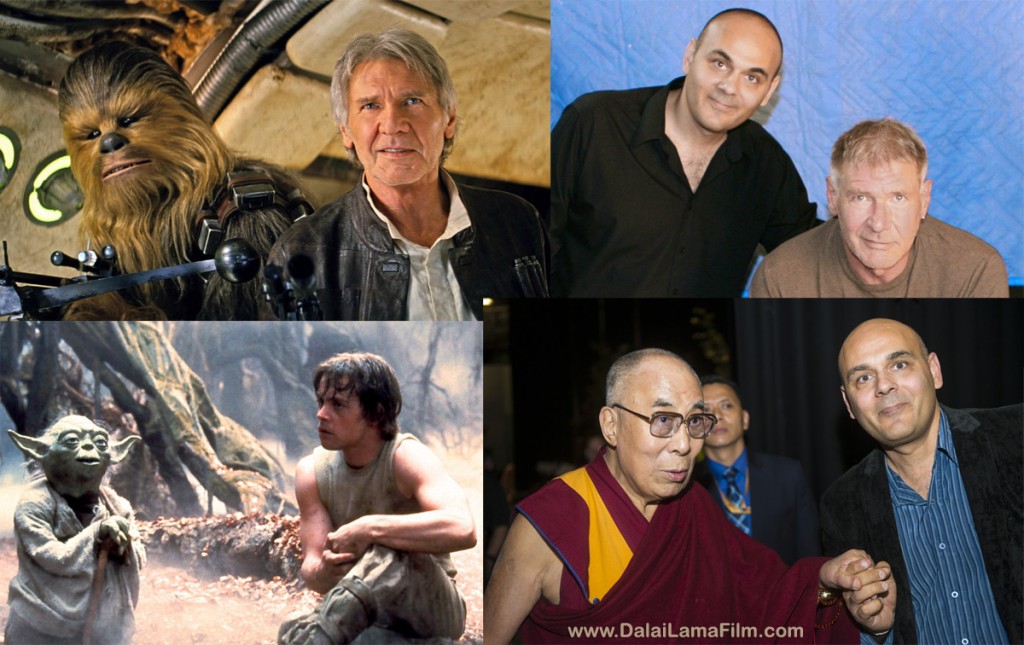 “May the Force be with you.”

I was 11 years old when I first saw the original 1977 Star Wars film in a small town movie theater in Oxford, Ohio. 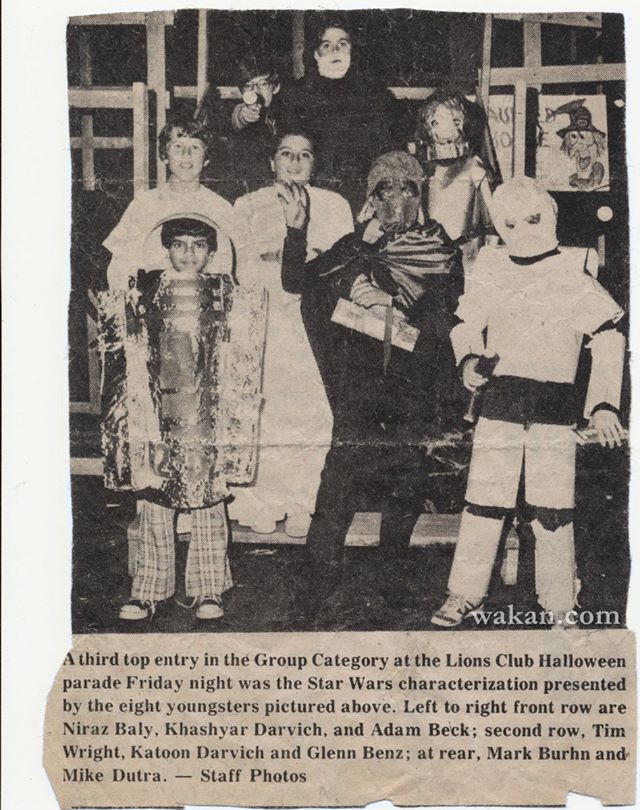 Seeing the film five or six times moved my imagination so much that I organized a group of my friends to create their own Star Wars costumes and pose as Star Wars characters in our small-town Midwestern Halloween parade.

Whatever we think it might mean, I chose to dress up as Darth Vader, making a paper mache black mask, as my other friends dressed as Han Solo, Princess Leia, Luke Skywalker and R2D2.

I could not have imagined then that, 30 years later, I would be working with Han Solo himself on a documentary film that I would produce and direct: Dalai Lama Awakening (www.DalaiLamaFilm.com), which is narrated by Harrison Ford, and that screened in over 100 cinemas around the world.

And ironically, and unintentionally, Dalai Lama Awakening screened in theaters in 2015 during the same year as the new Star Wars: the Force Awakens was released. Even though the Star Wars Producers and I were not aware that we were both including “awaken” in our film titles, perhaps there was some kind of divine coincidence or synchronicity.

The mythic profundity of Star Wars is one of the reasons that I was drawn to stories and films that were both an adventure and that led the audience on a journey of personal discovery. Perhaps this is why, when I was sitting down in the editing room with the mountain of 500 hours of footage for Dalai Lama Awakening, I understood that I needed to tell a story that not only was cinematically beautiful to the eyes, but that also led the audience on an inner journey of personal transformation.

This driving passion of transforming audiences through film is what motivates me as a filmmaker and human being. And I try, in the best way I can, to hold this intention in my heart and let that guide each of my actions forward.

I remember that, as an 11-year-old boy, the concept of “The Force” from the original Star Wars really stirred and awakened something deep within me. Perhaps it was because the film helped me recognize that there was a higher guidance or wisdom or “force for good” that we can call on.

But I had not yet confirmed this through my experience as a star(wars)-mesmerized kid.

Over 30 years later, after I became a documentary film director, I was brainstorming with my Wakan Films team about who would be the best narrator for our new Dalai Lama Awakening Documentary Film, and Harrison Ford was at the top of my list.

While the Dalai Lama (who is the main character in our film) is an icon of spirituality, peace and compassion, I felt instinctually that Harrison Ford would provide a good balance and complement as an icon of the “Every Man”: a solid grounding presence whose voice in the film’s narration would ground the audience in the ideas that he spoke.

Just as “The Force” in Star Wars is truly a force for good and intends to impact the universe in a positive way, it is ironic that I was working with a real Jedi Master of wisdom and compassion in His Holiness the Dalai Lama. 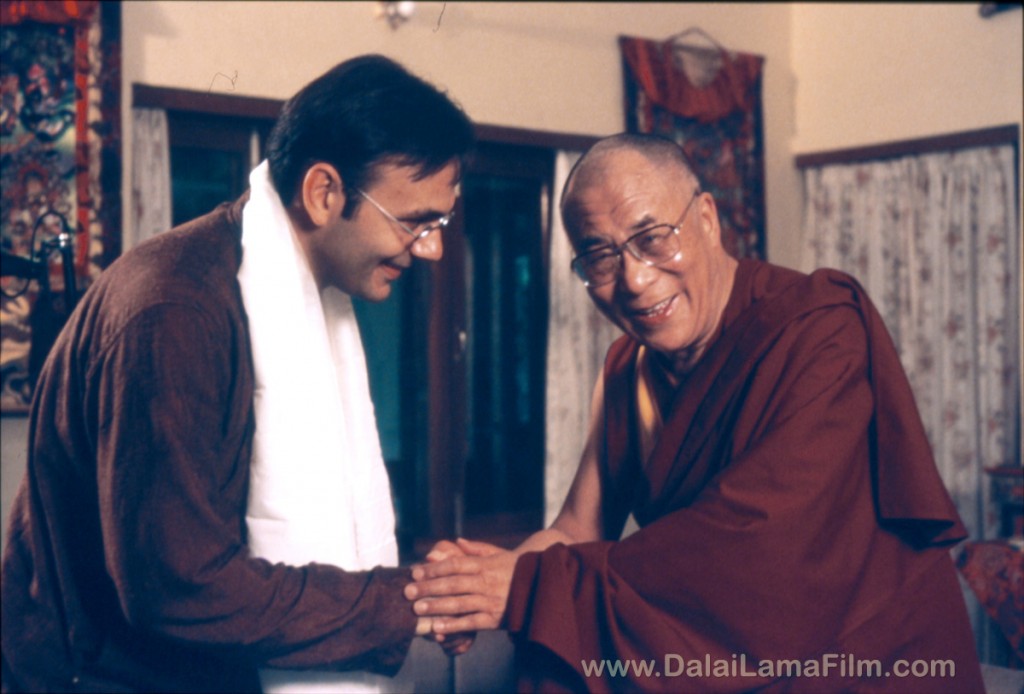 One of things that the Dalai Lama taught me while I was working on our film projects with him was that each of our highest purpose in our lifetime is to do good and be of service with the gifts and opportunities we have been given. Looking back, I recognize that it was like seeds of personal transformation were planted within me during my time with the Dalai Lama. Each year, another part of my heart and realization of my highest purpose blossoms.

The Force is the good in all of us that we can access. It is making a commitment (or as the Buddhists call it, a Bodhisattva Vow) to help others and to be of service to the good of all around us in the very best way we can.

The Dalai Lama expressed to me during one of my interviews with him that everyone has their own way of helping others, and everyone has their unique gifts that they are meant to share with the world that will leave the world a bit better than when they first arrived on this planet.

If we allow it to unfold, our inner voice becomes a calling.

And once we know what our Higher Purpose is, we must take action or suffer within knowing that we are not doing what we are meant to do.

Trusting and acting on that quiet inner guidance will leave us feeling a peace and deep contentment during the last days of our lives that we have done our job on this planet.

Interestingly, our Dalai Lama Awakening and Compassion in Action films also feature the quantum physicists from the hit films What the Bleep do You Know and The Secret: Fred Alan Wolf and Amit Goswami. Quantum Physics, like Buddhism, like Jedi Knight training, is a study (and sometimes mastery) of the profound fundamental forces that we cannot see but that propels each of our lives, and perhaps is a glimpse into the omnipresent soul of the Universe.

I feel grateful and fortunate that I worked with Harrison Ford during our narration recording session for Dalai Lama Awakening, and that he graciously and humbly allowed me to direct him.

Although our original plan was for Harrison to read each line of narration 3 times, he generously read each line 8 or 9 times, and even after the ninth, he patiently mentioned that “I can it again if you would like me to.” 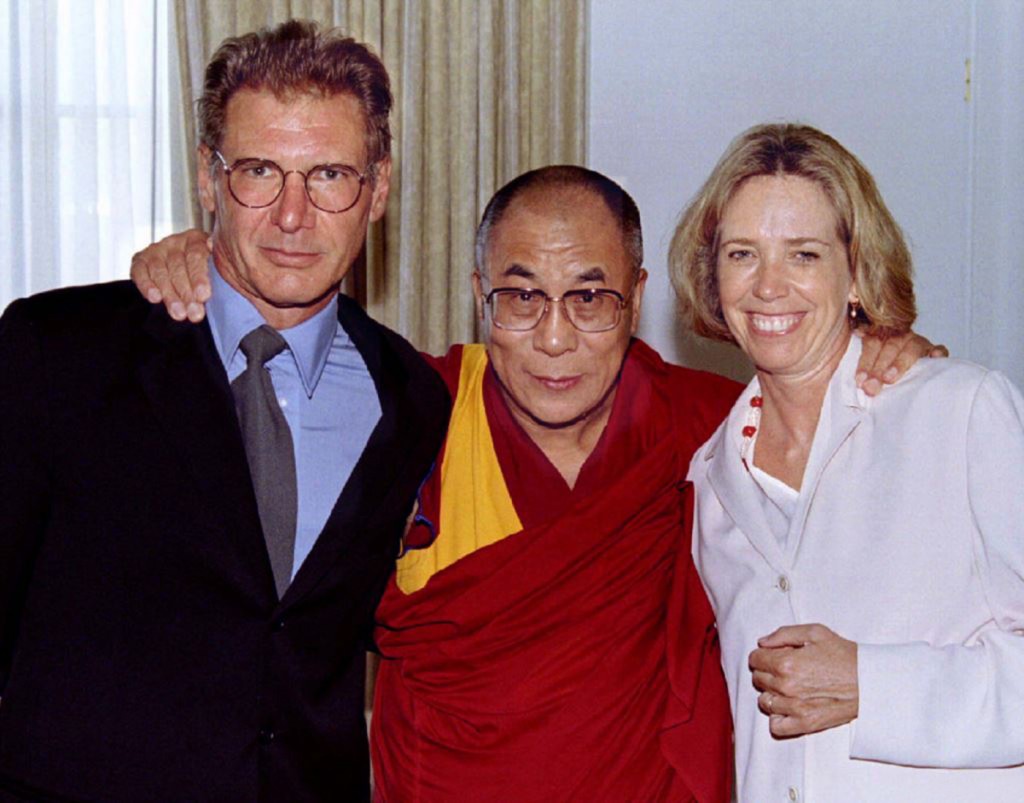 I did not know then, but learned later, that Harrison Ford had spent some time with the Dalai Lama as a result of his late wife Melissa Mathison’s friendship with the Tibetan Buddhist leader, and as a result of her writing the screenplay for Martin Scorsese’ 1997 film about the Dalai Lama’s life entitled Kundun.

Harrison Ford flew the Dalai Lama across the United States in his airplane on at least on one occasion. Harrison even spoke before a U.S. Congressional hearing in support of the preservation of Tibetan culture and the troubling oppression of the Tibetan People in Chinese-occupied Tibet.

I understand now that that Harrison Ford, in narrating our film, chose to use his fame and celebrity to do good: To support a film and help it reach and inspires even more audiences around the world.

“I narrated Dalai Lama Awakening because I believe His Holiness is making a positive influence in our world. For me, the film represented an opportunity to continue assisting the optimistic efforts of an extraordinary individual.”

The force that we can all tap into is a force that wants to do good in the world, and that wants to help and support us each time we choose to act in a way that truly and sincerely has the intention to help others and to serve the Greatest Good.

Luke Skywalker could not understand this simply from the words of Alec Guinness. He had to close his eyes, experience the force, trust and verify it for himself.

The insight that was awakened within me when I was an 11 year-old kid seeing the realization of Director George Lucas’ mythic dream was that if we open our hearts to it, there is goodness and higher wise guidance available to help us navigate the darkness and illusion and sometimes confusion of life.

Like Luke Skywalker being confronted with what he must do in the face of the imposing Death Star, in a moment of need or distress, we can close our eyes, connect with our inner guidance and navigate through what sometimes seems like treacherous and arduous obstacles in life. Or navigate through our inner “Dark Side” of illusion.

Perhaps as a young Iranian-American small town Ohio kid, I connected with my inner Luke Skywalker: enjoying driving through quiet cornfield-lined country roads and walking alone in isolated forests, not knowing that if we choose to listen for and trust the force of highest guidance that is within each of us, and trust taking the best action we know, one step at a time, then we can live an epic adventure that we could not have imagined, and that we thought was only available through the experience that came with eating a $10 bag of movie popcorn.

May the force be with you.

Khashyar Darvich is a film producer-director whose current 2 films about the Dalai Lama, Dalai Lama Awakening (narrated by Harrison Ford) and Compassion in Action (www.DalaiLamaFilm.com) have screened in over 100 cities around the world. His film production company, Wakan Films (www.wakan.com), produces films that have the intention of inspiring and transforming audiences and serving the Greatest Good.