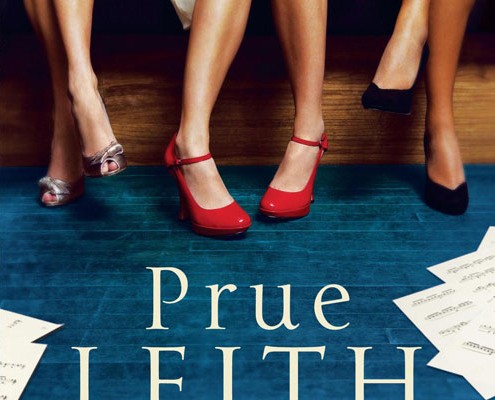 The Dalai Lama Renaissance film, narrated by Harrison Ford (www.DalaiLamaFilm.com), and a Q&A with Director Khashyar Darvich, offer insights on inner peace to men behind bars, half of whom are incarcerated for murder.

‘Dalai Lama Renaissance’ Documentary Film Producer-Director Khashyar Darvich speaks with inmates after a screening of the film at the Stiles Maximum Security Prison near Houston, Texas. Over half of the inmates in the audience are serving time for murder.

HOUSTON, TX – In a rare opportunity to contemplate the nature of their own existence and explore the essence of inner peace, dozens of inmates at two Texas prisons gained insights during screenings of the award-winning documentary film Dalai Lama Renaissance, narrated by Harrison Ford (www.DalaiLamaFilm.com). The film screened at the prisons as part of an ethics program organized by “Project Clear Light,” a nonprofit Buddhist volunteer organization that works with the Texas Department of Criminal Justice, and is scheduled to screen at other prisons across the United States in the coming months.

“There is such joy in being able to show films like Dalai Lama Renaissance to inmates,” said Terry Conrad, a certified volunteer Chaplain’s assistant, and Director of Project Clear Light. “It is so rewarding to sit in meditation and have a conversation with them about what is really important, and to understand who we are and what we are capable of.”

Conrad asked the film’s Producer-Director, Khashyar Darvich, to show Dalai Lama Renaissance to inmates whom Conrad regularly meets with and teaches. With approval from prison administrators, two screenings were scheduled: one in the Stiles prison in Beaumont, Texas, and one in Ramsey prison, south of Houston. Darvich then volunteered to fly to Texas to speak with inmates after each screening. About half of the inmates in the prison audiences were convicted of murder.

“The intention of making this film was to impact audiences in a positive way,” said Director-Producer Khashyar Darvich of Wakan Films. “I had never been to a prison before, but I had a deep sense that inmates may have something to say about the film’s theme of overcoming the ego and opening one’s heart.”

Both Darvich’s and Conrad’s purpose in screening the film for inmates was to provide them with a message that urges them to focus on improving themselves from the inside out.

“I heard the Dalai Lama talking about the importance of compassion for compassion’s sake, because it’s the right thing to do,” said David, an inmate at the Ramsey Unit. “Because that’s what makes you happy inside, it’s what helps you develop inner peace…. When he started talking about it, I just started getting tingly all over…. It really touched me.”

“What I thought was so profound about the film was the child-like simplicity of the Dalai Lama and the profoundness of his understanding of how human nature and humanity works,” said Deon, another inmate at Ramsey.

The award-winning film, which is narrated by Harrison Ford, and has screened in hundreds of cinemas around the world in several languages, follows a group of Westerners who travel to India with the task of solving world problems under the spiritual guidance of the Dalai Lama. The film contrasts the Westerners’ intellectual approach to problem-solving against the enlightened approach of the Dalai Lama, and illustrates how the participants experience a profound personal transformation. 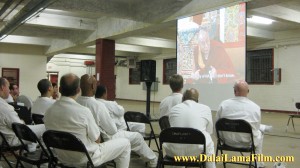 Besides opportunities for introspection, the film also offered inmates some chances to laugh at the imperfection of humanity.

“It was funny to see these super-smart people and realize that they were too smart for the task,” said Jason, a prisoner at Ramsey, about the scientists and other world thought-leaders in the film.

Inmate Kelly added, “I saw something in the Dalai Lama that I now see in my own personal life, which is joy and compassion and peace.”

At both prisons, the inmates were attentive to the film and looked for ways to apply its lessons to their personal lives.

“I took a few notes, but I feel like I missed about 20,000 more than I was able to put down,” said John, an inmate at Stiles prison.

Fellow Stiles inmate Antoine added, “I could watch something like this every day, especially in the environment I’m in. You know, it’s like a snake pit. But if you’ve got inner peace, you will affect every person around.”

Darvich plans to offer the film for screenings at other prisons around the country, and would like to attend and speak with other inmate groups in person.

“The fundamental intention of making this film was to impact and transform audiences in a positive way,” Darvich said,  “and I can think of no better place to screen the film than a prison.”

Details about Dalai Lama Renaissance and prison screenings are available at www.DalaiLamaFilm.com.