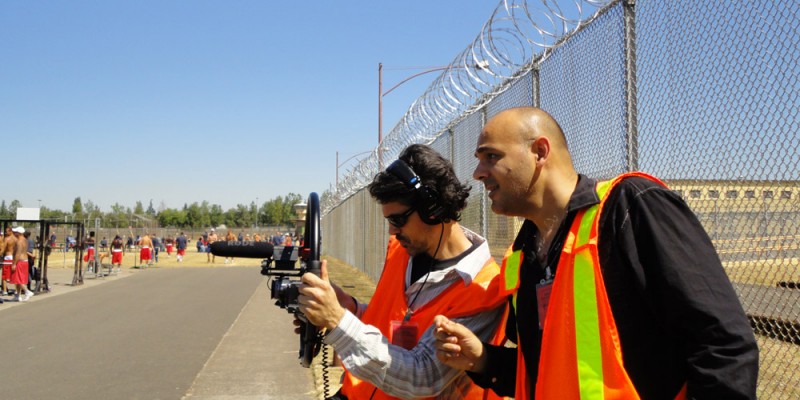 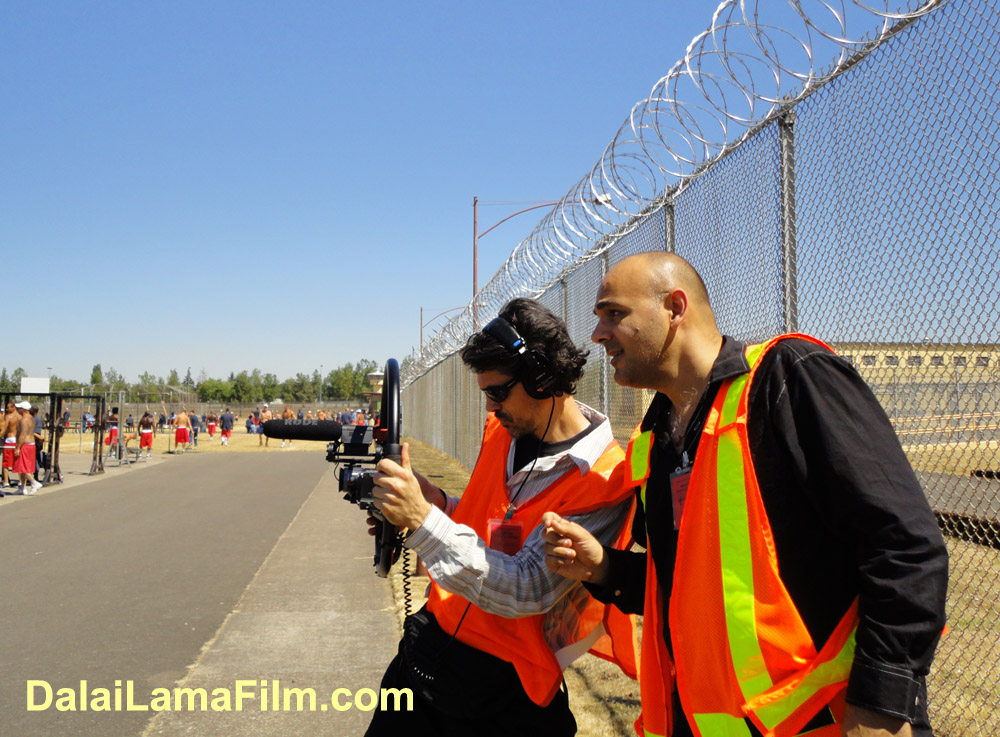 Dalai Lama Renaissance Director Khashyar Darvich (on right) with one of his camera crew during filming inside a prison in Oregon for a new documentary film about spiritual transformation in prisons.

Standing in the middle of the yard, the guard towers looming overhead and inmates wherever my eyes scanned, I was taken with the knowledge that I knew so few of the men. In the moments preceding our entrance to the yard we had been told to drop to the ground and remain motionless if anything went wrong. The guards, corrections officers (CO) as they prefer to be called, were nervous about the five of us filming the general population. Their nerves set mine on edge and it added to the discomfort as we pass through the locked gate.

For the past three years I had traveled the distance to the Oregon State Corrections Institution on every other Sunday. The men who participated in the Sunday meditation program had become my friends. I knew, that despite the fact the State didn’t negotiate for hostages, I was safe. It wasn’t a naïve trust. It was trust that came from meeting the hearts and souls of the inmates, of shared truth and common humanity.

When I entered the prison for the first time I was more than a bit anxious. I was supposed to be joining another volunteer. He had called at the last minute and I was going in alone. I don’t know what I expected but when I doors clanged shut behind me I was standing in the corridor with several inmates. It was a few minutes before the door to academics was opened and I stepped inside. The Chaplain opened the door to my meeting room and explained that he would be down the hall … and then left. A few minutes later the men began to trail into the room.

My anxiety dropped away, dissipating with the newness of each man’s presence. We sat in a circle and began talking about life – our fears, our failings, our hopes, our deepest heartfelt desires. The three hours melted away quickly. As I walked out of the prison that afternoon the sun was shining and the air smelled fresh. Nothing seemed amiss until I reached for the door handle of my car and the bottom fell out of my world. I stood there free, able to go anywhere I wanted. The preciousness of freedom rang through every cell in my body. My hands shook and it felt as if the earth quaked. If the men I had just met were wearing suits, sitting around a board room table no one would have known they were inmates. There was no way to tell. My reaction was due to more than mere appearances. The men were open and raw, honest in ways I had never experienced before. They were truly interested in breaking through their fears, in doing the hard work to awaken to their true nature.

Over the years, as I grew to know the men’s hearts, I had a reoccurring vision of taking them into the hi-schools, neighborhoods and workplaces to share their stories of heartbreaking pain and suffering – that of their victim’s, their families’, their society’s and their own – and the rich and inspiring stories of the power of meditation and compassion to redeem lives. I didn’t know how that would come to pass. Standing in the yard I saw the vision unfold. Khashyar’s film, the story of these men at OSCI that we filmed that day, would make that possible. The men’s stories are vital to the evolutionary leap necessary for human consciousness. Their honesty and candidness can teach us much if we are willing to listen. Khashyar’s film will tell their story to the world.

Gayle Gregory is the author of award-winning business management and leadership book, Workplace Evolution: Common Sense for Uncommon Times, and co-author of The Grand Experiment, an Expedition of Self Discovery.  She is a former senior manager with two Fortune 500 companies and the co-founder of Workplace Evolution (WE). Workplace Evolution’s speakers, as well as their coaching and facilitation services, create a shift from ‘me to we’ in the workplace that allows businesses to thrive in any climate. Ms. Gregory founded Pure Possibility, a coaching and mentoring program that works with individuals and with men in Oregon State’s medium security prison. She is also a co-founder of The Institute of Bully-Free Living. All avenues of her work bring more compassion into the world.