Letter from President Barack Obama to the Dalai Lama – July 24, 2008 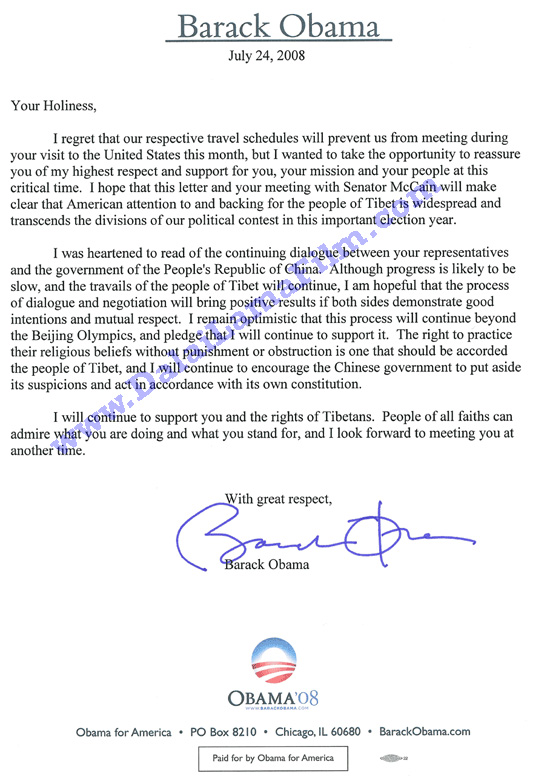 President Barack Obama Letter to the Dalai Lama on July 24, 2008

Here is a letter that then Democratic candidate Barak Obama wrote to the Dalai Lama on July 24, 2008, explaining why he was not able to meet him in person during the Dalai Lama’s visit to Aspen, Colorado.

Here is the text of the letter:

I regret that our respective travel schedules will prevent us from meeting during your visit to the United States this month, but I wanted to take the opportunity to reassure you of my highest respect and support for you, your mission and your people at this critical time. I hope that this letter and your meeting with Senator McCain will make clear that American attention to and backing for the people of Tibet is widespread and transcends the divisions of our political contest in this important election year.

I was heartened to read of the continuing dialogue between your representatives and the government of the People’s Republic of China. Although progress is likely to be slow, and the travails of the people of Tibet will continue, I am hopeful that the process of dialogue and negotiation will bring positive results if both sides demonstrate good intentions and mutual respect. I remain optimistic that this process will continue beyond the Beijing Olympics, and pledge that I will continue to support it. The right to practice their religious beliefs without punishment or obstruction is one that should be accorded the people of Tibet, and I will continue to encourage the Chinese government to put aside its suspicions and act in accordance with its own constitution.

I will continue to support you and the rights of Tibetans. People of all faiths can admire what you are doing and what you stand for, and I look forward to meeting you at another time.

List of Best Books by H. H. The Dalai Lama and Top Synthesizers
10 Inspirational Quotes by H. H. the 14th Dalai Lama to Keep You Happy in Donald Trump’s America
China Producing Art Propaganda on Tibetan Culture and History in Attempt to Control the Message of Dalai Lama and Tibet
Science and the Dalai Lama: New Discoveries, New Thought, Space Travel…
Where Do Clinton and Sanders Stand on Tibet (& the Dalai Lama)?
The Dalai Lama Weighs in on Socialism as Bernie Sanders Surges in the Polls
Harrison Ford narrates new Dalai Lama film, revives another franchise in BLADE RUNNER…
Star Wars, the Force and the Dalai Lama
Dalai Lama’s Teachings on Love, Sex and Happy Relationships
Video of Director Khashyar Darvich speaking with the Dalai Lama Barack Obama Statement Honoring the Awarding of the Congressional Gold Medal to the Dalai Lama – October 17, 2007