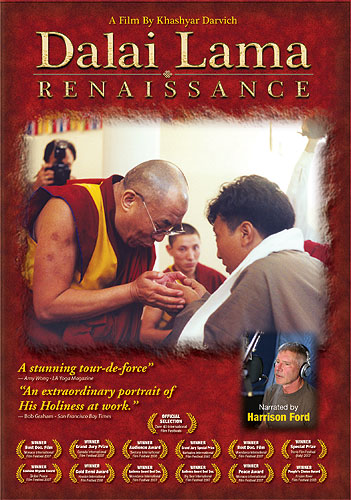 LOS ANGELES- The PAL DVD version of “Dalai Lama Renaissance” will be available to ship outside of the United States and Canada on June 15.

The PAL version of “Dalai Lama Renaissance” will contain the 82 minute feature documentary film, as well as 105 minutes of additional Special Features.

The film tells the story of 40 Western innovative thinkers who travel to India to meet with the Dalai Lama to solve the world’s problems. What happened was surprising and unexpected, and led to profound transformation.

Dalai Lama Renaissance is produced by Khashyar Darvich and the Wakan Films.

The film’s DVD release offers bonus features including deleted scenes, cast commentaries, featurettes, and a Q & A with Producer/Director Khashyar Darvich. This Wakan Films release will be available on DVD for $24.95 SRP.