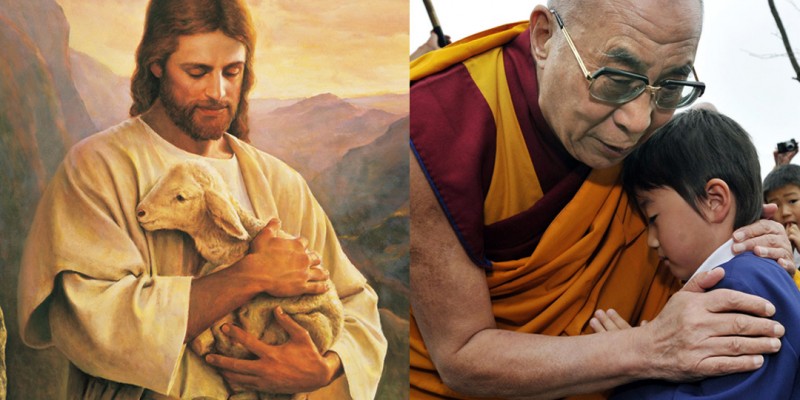 Both Jesus and the Dalai Lama were Refugees, and both Taught Compassion, Kindness and Helping Those in Need 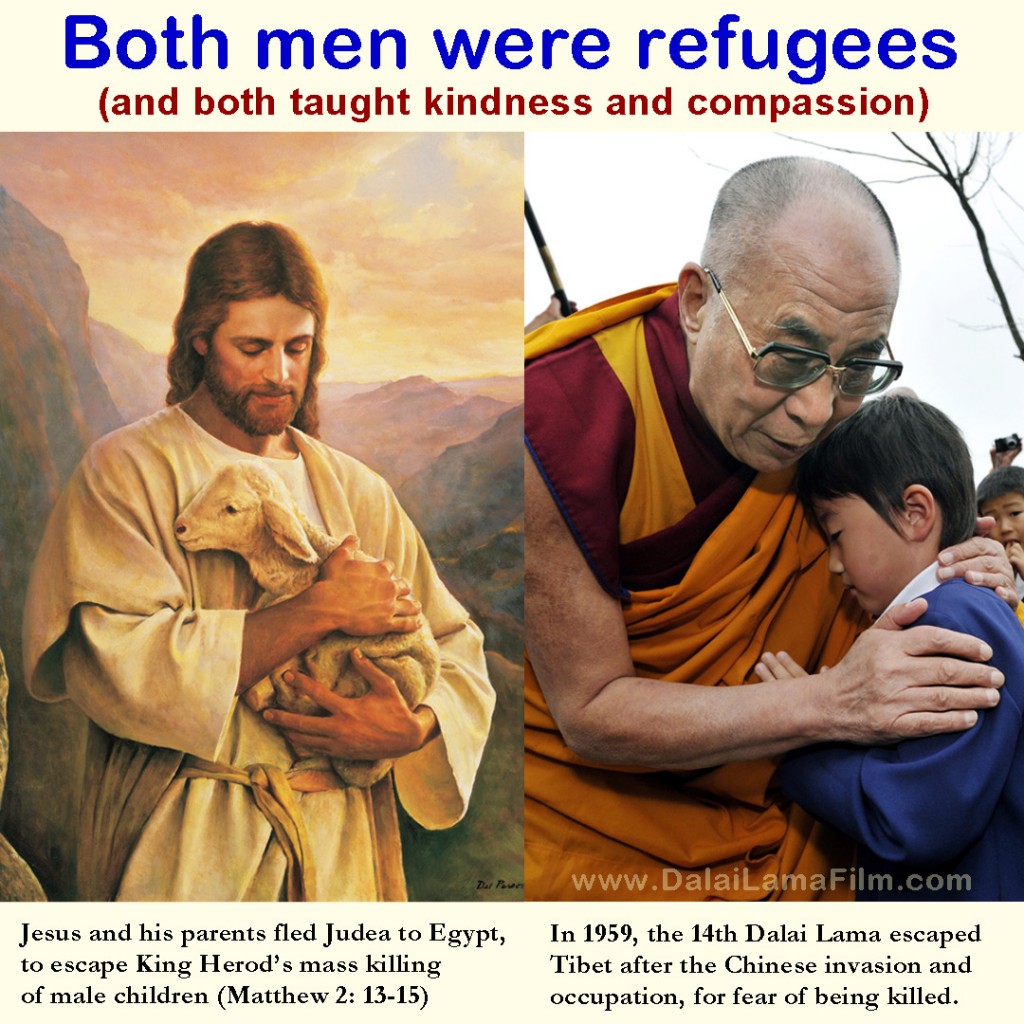 The Dalai Lama often shares that we are all interconnected.

What one person experiences, all of us will or have experienced. What affects one of us, affects all of us in ways that we sometimes don’t initially see.

In the aftermath of the November 13 Paris terror attacks by ISIS, there has been both resistance and openness in the West in accepting the over 3 million Syrian refugees who have fled war, atrocities and starvation.

It is widely known that His Holiness the 14th Dalai Lama, the spiritual leader and face of Tibetan Buddhism, is a refugee who, with thousands of other Tibetans, escaped his homeland in Tibet in 1959 after the Chinese invasion and occupation.

Since the Chinese invasion, 1.2 million Tibetans were killed under Chinese rule according to the Tibetan Government in Exile.  And today, over 150,000 Tibetan refugees are currently living outside of Tibet.

But fewer people may know that Jesus himself was a child refugee after his parents escaped atrocities in Judea by the King Herod, who began killing the first born males in Bethlehem after hearing that the King of the Jews would be born and fearing a loss of power.

In Matthew 2: 13-15, the Bible describes the young Jesus and his family escaping to Egypt:

“Now after they had left, an angel of the Lord appeared to Joseph in a dream and said, “Get up, take the child and his mother, and flee to Egypt, and remain there until I tell you; for Herod is about to search for the child, to destroy him.” Then Joseph got up, took the child and his mother by night, and went to Egypt, and remained there until the death of Herod. This was to fulfill what had been spoken by the Lord through the prophet, “Out of Egypt I have called my son.”

In June of 2014, Pope Francis shared this fact with his audience:

“We believe that Jesus was a refugee, had to flee to save his life, with Saint Joseph and Mary, had to leave for Egypt,” Pope Francis said. “He was a refugee. Let us pray to Our Lady who knows the pain of refugees.”

Perhaps because of his experience as a child refugee, Jesus expressed empathy and compassion to these who need help:

“The King will reply, ‘Truly I tell you, whatever you did for one of the least of these brothers and sisters of mine, you did for me.’”

Jesus’ half-brother wrote this letter to Christians urging them to practice Christianity in their daily lives:

“What good is it, my brothers and sisters, if someone claims to have faith but has no deeds? Can such faith save them? 15 Suppose a brother or a sister is without clothes and daily food. 16 If one of you says to them, “Go in peace; keep warm and well fed,” but does nothing about their physical needs, what good is it? 17 In the same way, faith by itself, if it is not accompanied by action, is dead. “ – (James 2:14-17)

The Buddha, who lived 500 years before Jesus, also taught the importance of compassion and helping others in need:

“Give, even if you only have a little,” said the Buddha (in the Dhammapada verse 224).

“All tremble at violence; all fear death. Putting oneself in the place of another, one should not kill nor cause another to kill.” – Buddha, Dhammapada (verse 129).

The 14th Dalai Lama, who won the Nobel Peace Prize in 1989 and fled Chinese Occupied Tibet in 1959 for fear of his life, expressed:

“If you want to experience peace, provide peace for another”

“Compassion can be put into practice if one recognizes the fact that every human being is a member of humanity and the human family regardless of differences in religion, culture, color and creed. Deep down there is no difference.”

“Interdependence is a fundamental law of nature. Even tiny insects survive by cooperating with each other. Our own survival is so dependent on the help of others that a need for love lies at the very core of our existence. This is why we need to cultivate a genuine sense of responsibility and sincere concern for the welfare of others.”