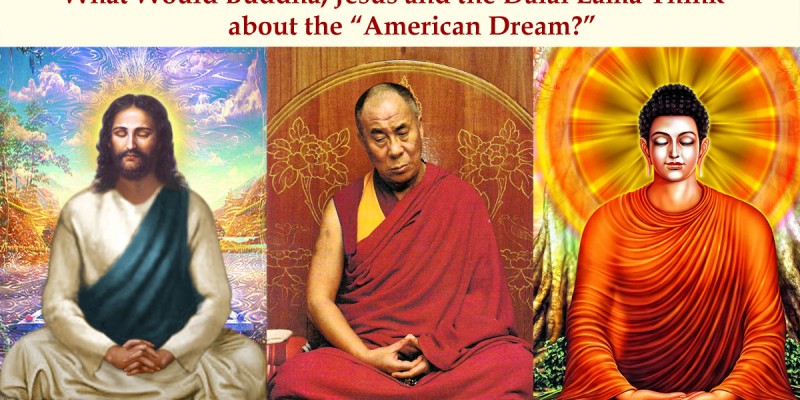 What Would Buddha, Jesus, and the Dalai Lama Think about the American Dream? 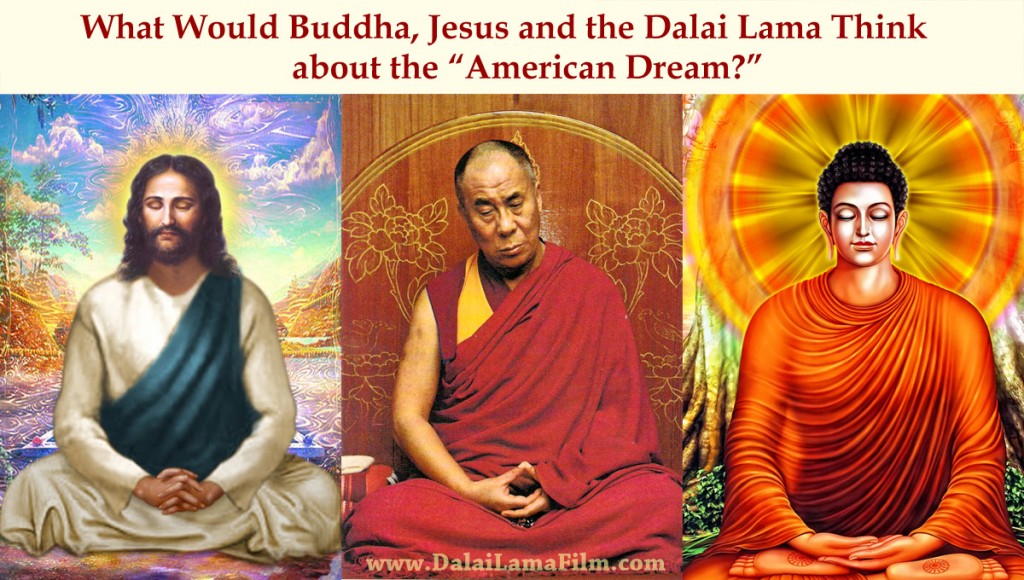 Is how we live based on what they taught?

For many in the world, the “American Dream” is the idyllic standard of living that promotes Democracy, Rights, Liberty, Opportunity, and Equality as a way to experience happiness.

This ideal was immortalized in the U.S. Declaration of Independence in 1776, which established in the American consciousness that “all men are created equal” that have the right to “Life, Liberty and the pursuit of Happiness.”

But for many today, escaping economic struggle, economic prosperity, and accumulating wealth is their main vision and interpretation of the “American Dream.”

As the music group the Talking Heads wrote in their song ‘Once in a Lifetime’:

If Buddha and Jesus where on Earth today, what would they say about the society that we’ve created and that has been imprinted in our psyche by media, the internet and advertising?

In the new documentary film, ’Dalai Lama’s Compassion in Action’ (www.DalaiLamaFilm.com), Christian mystic monk and close friend of the Dalai Lama, Wayne Teasdale, speaks about what Jesus and Buddha would think of the ‘American Dream’:

“What would the Buddha and Christ think about the ‘American Dream’?” Teasdale shares. “Well we know what they thought. And we saw what the Buddha did, because the Buddha had the ‘American Dream’ 2,400 years ago. And what did he do? He gave it all up. He was 29 years old. He was heir to the throne. He was incredibly educated. He was very handsome. He had a beautiful wife and beautiful son. And he would have become an emperor, eventually. He gave it all up. And why? Because it’s impermanent. And the injustice that he’s in that position, and for him to be in that position, all these other people must be oppressed and subservient.”

The Buddha lived the ‘American Dream’ by the Western Standard, but realized that it brought suffering instead of happiness, and relinquished it to seek happiness from within.

“The root of suffering is attachment,” Buddha taught in the Pali canon, ‘Upadhi Dukkhassa Mūlanti’.

And this includes attachment to wealth and material possessions.

“Riches ruin the foolish, but not those in the quest of the Beyond,” said the Buddha in the ‘Dhammapada’ (v. 355). “Through craving for riches, the foolish one ruin himself as (if he were running) others.”

Or as David Byrne of the ‘Talking Heads’ expresses:

“What does it profit them if they gain the whole world, but lose or forfeit themselves?” — Luke 9:25

“Sell your possessions, and give alms. Make purses for yourselves that do not wear out, an unfailing treasure in heaven, where no thief comes near and no moth destroys. For where your treasure is, there you heart will be also.” —Luke 12:33-34

If you interpret “Heaven” as meaning ultimate happiness, inner peace, wisdom and enlightenment, then what Buddha and Jesus taught was similar.

And what did Jesus say was the right use of money?

“Give to the one who asks you, and do not turn away from the one who wants to borrow from you.” — Matthew 5:42

Jesus especially taught to give to and help the poor:

“When you give a luncheon or a dinner, do not invite your friends or your brothers or your relatives or rich neighbors, in case they may invite you in return, and you would be repaid. But when you give a banquet, invite the poor, the crippled, the lame, and the blind. And you will be blessed, because they cannot repay you, for you will be repaid at the resurrection of the righteous.” — Luke 14:12-14

At the same time, Buddhism teaches that we have the ability, responsibility and freedom to create our own reality and circumstances, and not to rely on anything or anyone outside of ourselves.

“Buddha is our teacher. Real protector. Real protection comes through one’s own practice of Dharma. That is the Buddhist way. If we consider Buddha as a creator, then, Ok, pray to Buddha, and he may arrange our future. But since we do not have that idea, Buddhism actually taught us: ‘You, yourself are your own master. Ultimately you, yourself: creator.’ So one’s own future is entirely dependent on one’s own shoulder. Buddha taught that.”

The Dalai Lama’s words are echoed by the Buddha in the ‘Dhammapada’:

Even though the Dalai Lama has expressed his attraction to the best of the Marxist theory (especially regarding economic fairness and equality), he also has expressed his faith in our modern free-market system:

In the Dalai Lama’s book, ‘The Leader’s Way,’ he writes:

“I have come to put my faith in the free-market system… The fact that it allows for freedom and diversity of thought and religion has convinced me that it is the one we should be working from.”

The Dalai Lama’s hope is that from the foundation and principles of freedom (both religious and personal) and equal opportunity to pursue and attain happiness, that we can work within the modern world to create a level of happiness that we strive to experience.

But, as the Dalai Lama and the Buddha often teach, we must question and verify what we are told, and what we create is up to us:

“You yourself must strive. The Buddhas only point the way.” – The Buddha, ‘Dhammapada’