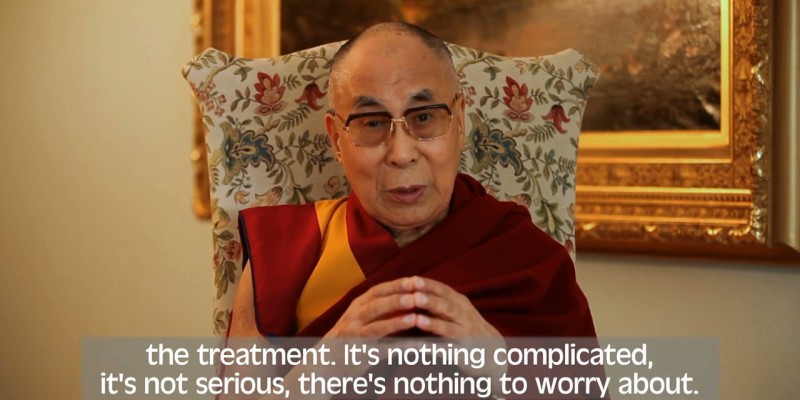 ROCHESTER, Minn. – Speaking for the first time since his medical prostate treatment at the Mayo Clinc in Rochester, Minnesota, the Dalai Lama in a video released today reassured supporters that his prostate treatment was nothing to worry about, and that he is taking rest.

He also went on to express appreciation to followers and supports who prayed for his health, and wished them a Happy Tibetan New Year.

The exiled Tibetan leader traveled to the United States from India on January 19 for a medical checkup and prostate treatment, and many Tibetans and supporters were worried about his health.

In the video, the Dalai Lama said:

“The treatment only takes a few minutes every day, but it will take time to complete the treatment. It’s nothing complicated, it’s not serious, there’s nothing to worry about.”

“I’m relaxed and taking it easy, it’s almost as if I’m taking a rest”

“I want to tell you not to worry at all”

On January 21, a spokesman for the clinic said that the prostate treatment the 80 year-old is receiving is normal for a man of his age, and that he is expected to make a full recovery.

In September 2015, after a medical checkup, doctors advised the Dalai Lama to cancel his October U.S. engagements and receive rest for several weeks.