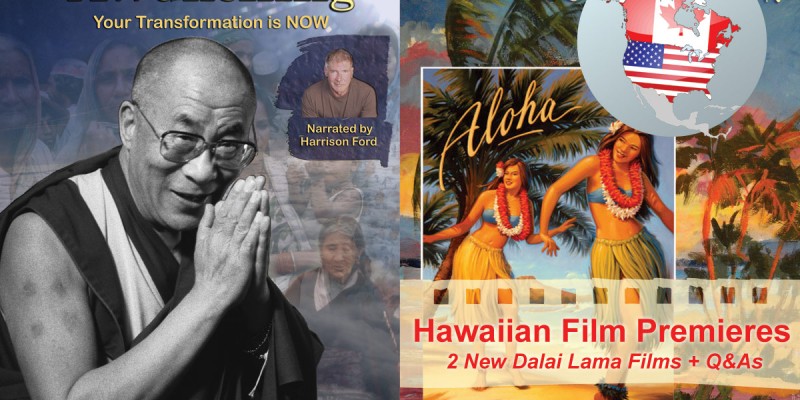 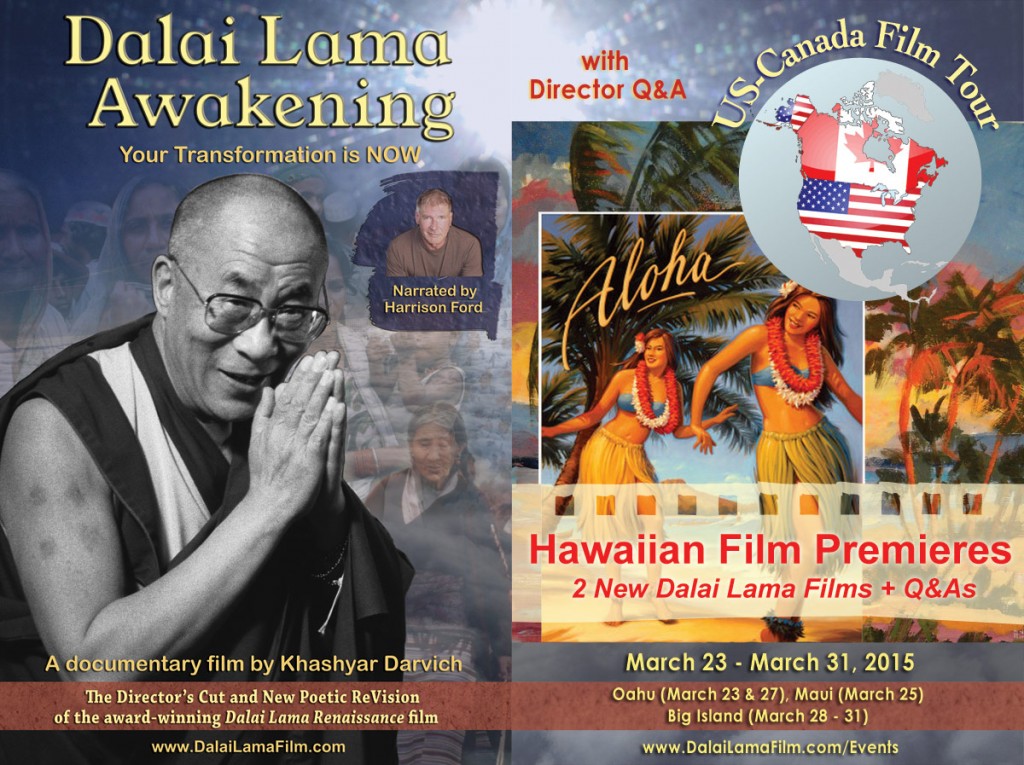 The Film Premieres of Dalai Lama Awakening (narrated by Harrison Ford) and Dalai Lama’s Compassion in Action begin with the Hawaiian Premiere on March 23 at the Kahala 8 Consolidated Theatres in Honolulu, and are a part of a 100-city U.S.-Canada “Dalai Lama Double Feature” Film Tour.

HONOLULU, HI – After having his award-winning films screen over 1,000 times in theaters around the world, win dozens of international awards, and feature such notable figures as H.H. the 14th Dalai Lama, Harrison Ford and poet Maya Angelou, Film Director Khashyar Darvich and his two newest documentary films featuring the 14th Dalai Lama, Dalai Lama Awakening (narrated by Harrison Ford) and Dalai Lama’s Compassion in Action (www.DalaiLamaFilm.com), visit Hawaii from Monday, March 23 – Tuesday, March 31 for its Hawaii Film Premiere on the islands of Oahu, Maui, and the Big Island.

This special Hawaiian Film premiere of “Dalai Lama Double Feature” Film Tour begins on Monday, March 23 at the Kahala 8 Consolidated Theatres in Honolulu, and then screens in Maui and on the Big Island through March 31. There will be an audience Q&A and DVD signings after the screening and a chance to meet and speak with the Director. For tickets and information, visit: www.DalaiLamaFilm.com/events

The complete Hawaiian Film Tour schedule (including Director Q&A) is:

The Dalai Lama Awakening Film is part of the “Dalai Lama Double Feature” Film Tour (and includes a second new Dalai Lama film, Dalai Lama’s Compassion in Action, and is experiencing enthusiastic success in cinemas and with audiences. Among the sold out screenings on this tour, the Merrill’s Roxy Cinema in Burlington, Vermont experienced the highest ticket presales for Director Darvich’s Dalai Lama Films in the history of the theater for a documentary film.

After one of Darvich’s interviews with the Dalai Lama, the Dalai Lama affirmed Darvich’s and Wakan Films’ motivations in producing films– “Yes I like your questions,” the Dalai Lama told Darvich, as the two were standing together talking after the interview. “Certainly, your effort can make some contribution—there’s no doubt.”

You may view the trailer for Dalai Lama Awakening, here: http://www.youtube.com/watch?v=fgiNutr0pig

To view the entire detailed screening and release schedule for the film, as well as receive the latest news, you may visit the film’s official website (http://www.DalaiLamaFilm.com), Facebook page (https://www.facebook.com/DalaiLamaAwakening) , and Twitter account (http://www.Twitter.com/DalaiLamaFilm).