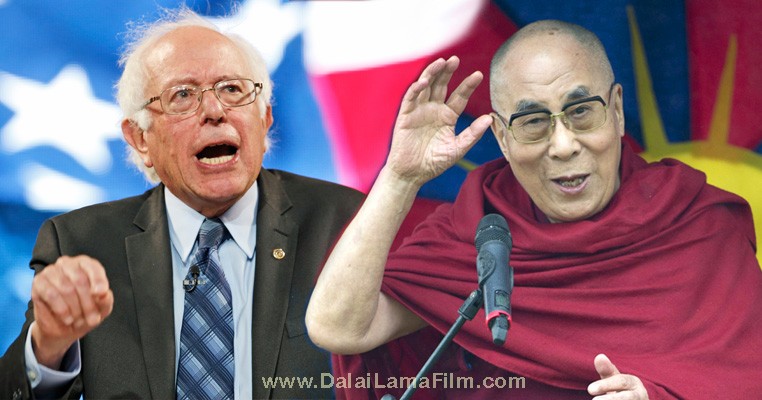 Will China “Feel the Bern” on Tibetan Human Rights and Dalai Lama if Bernie Sanders is elected President of the United States?

China may “feel the Bern” if the Democratic Presidential Candidate wins the November 2016 U.S. election.

Of the candidates running in the U.S. Presidential 2016 election this November, Vermont Senator Bernie Sanders is probably the most vocal and consistent supporter of Tibetan human rights among of all of the 2016 candidates.

In the Democratic Party’s U.S. primary election campaign, which will decide which candidate will face the future Republican party winner, Sanders and Hillary Clinton are in a statistical tie in the first caucus state of Iowa, and Sanders has a strong lead in the proceeding New Hampshire state primary election. If the election were held today, either Clinton or Sanders would oppose leading Republican Candidate Donald Trump.

Bernie Sanders, who declares himself as a Democratic Socialist, has been strongly critical of China’s human rights abuses and advocates religious and cultural autonomy for Tibetans as well as dialogue between His Holiness the Dalai Lama and the Chinese Government.

As a U.S. Senator, Sanders co-sponsored legislation condemning the violence of the Chinese Government in Tibet.

When he was a U.S. Congressman, Sanders co-sponsored a Congressional resolution condemning China for its poor human rights record.

On Sanders’ Campaign website, he affirms that:
“All countries must respect fundamental human rights, including China.”

• Stop the persecution of all religious practitioners and safeguard fundamental human rights.
• Release from detention all religious practitioners, Falun Gong members, and prisoners of conscience and end torture and other cruel, inhuman, and degrading treatment.
• Allow the Chinese people to pursue their personal beliefs.
• Adhere to the International Covenants on Civil and Political Rights and on Economic, Social, and Cultural Rights.
• Respect the right of the people of Tibet to speak of the Dalai Lama and possess his photograph.
• Allow international journalists free access to China.
• Provide a full accounting of the March 2008 protests in Tibet.

In 1999, Sanders spoke strongly in support of Tibetans on the floor of the Senate, and described the cultural genocide that is occurring within Tibet, saying that with its policies within Tibet, that China is “making a concerted effort to wipe Tibetan Buddism off the face of the earth.”

“Under the 50 years of the Chinese occupation,” says Sanders, “the Tibetan People have been denied most rights guaranteed in the Universal Declaration of Human Rights, including the rights to self-determination, freedom of speech, assembly, movement, expression and travel.”

“In the 20 years after the 1959 uprising, 1.2 million people (or 20% of Tibet’s population) was killed. Today, the Chinese are further undermining Tibet with a massive influx of ethnic Chinese into Tibet.”

“Religious repression is one of the cruelest aspects of the Chinese regime in Tibet.”